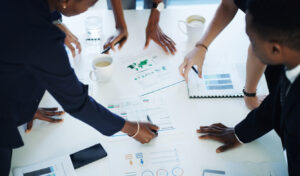 KENNETH WIGGINS, CEO and Chairman of the Board

Mr. Kenneth Wiggins is the CEO of KenCord Biotherapeutics, LLC.

Kenneth received  his Bachelor of Science degree in Biology from the University of North Carolina at Chapel Hill. He actively donates to the American Heart Association, American Diabetes Association, Annual Walk for the Cure, and Feed the Community charities.

In addition to his volunteer efforts, Ken has held memberships at the Cardinal Club, and Triangle Society Club of Raleigh. He has served on the Livingstone College Board of Visitors and as a Board Member for NC MedAssist (not for-profit Community Pharmacy).

Rick Copeland is known for his tireless work ethic and being data driven. He is an energetic leader with a collaborative approach to achieve organization goals. As North America sales director for The Dow Chemical Company Coatings Business,  he managed global budgets exceeding $1.5 billion.

Rick’s ability to work closely with internal and external customers at all levels creates significant profit opportunities. His philosophy: HONESTY, INTEGRITY, and TRUST (H.I.T.) are core values which guide his technical engagement with industrial chemical customers. A trusted technical advisor to senior leaders, process engineers, EH&S, and plant managers, he has leveraged interpersonal and collaborative problem-solving skills to build a competitive advantage. His technical expertise and problem-solving approaches have earned him leadership, global account executive, and salesman of the year awards.  He serves on the boards of Global Health Connections International and Junior Achievement of Eastern North Carolina.

Wayne Greene is a Partner at Progressive Funding Solutions, LLC and has a diversified financial background. He was a principal at Opus Capital Partners where he was involved mergers and acquisition. He was also emerging manager of advisory services of the private equity firm.  Wayne’s responsibilities at Opus included sourcing and analyzing acquisition opportunities.

His capital planning skills were honed at American Airlines where   he analyzed capital projects valued from 500 thousand to over  1 billion dollars.  Many of these projects were technical in nature including software, computer systems, avionics, and aircraft acquisitions. As regional controller for Argenbright Incorporated, he managed  the divisional budget that grew by over 400%.

Mr. Greene is a mentor in a youth program designed to create future business leaders.  Wayne received his Bachelors of Science degree in Finance from the Whitman School at Syracuse University. He received his MBA from the Zicklin School of Business at Baruch College in New York.

Robert Elliott is a Public Servant with nearly ten years in the US Army as a Military Intelligence Officer and 25 years as a Special Agent in the Federal Bureau of Investigation. His entire career has been dedicated to providing secure environments for people, property and information.

Robert is a highly experienced Background, Criminal and National Security Investigator which lead to several promotions and US Public Service Awards. His leadership, natural curiosity, and problem- solving abilities ensured he was successful as a Counterintelligence Agent, Espionage Case Manager, and Chief of the FBI’s Counterintelligence Training Center.

Robert has a Bachelor of Science Degree in Criminal Justice from Saint Augustine’s University. He has successfully completed the US Army Basic and Advanced Military Intelligence Officer schools. He is a graduate of the US Army’s Command and Staff Services College. During his tenure in the FBI, he was trained in legal, Information Security, CCTV, Physical Security, Insider Threat, Active shooter, OSHA, and Master Class Interviewing and Interrogation techniques.